The following are several documents outlining the results from inspections and surveys from third-parties:

Steve D’Antonio of Steve D’Antonio Marine Consulting Inc, served as PAE’s own expert with respect to surveying boats. D’Antonio inspected the Aurora and its systems and components between December 15-19, 2013.D’Antonio’s inspection report found 179 deficiencies with PAE’s work on the Aurora, including critical safety items that could result in the risk of explosion, electrocution, fire, injury, or loss of life.

Christian and Company Marine Surveyors inspected the P.A.E. Nordhavn 120 Aurora vessel on September 27-29, 2015 and February 4-6, 2016. The inspections concluded that the vessel did not meet industry standards with respect to quality, design, construction, completion, or commissioning. PAE failed to meet the standard of care expected for a vessel of this type.

Offshore Interiors Inc inspected the Aurora vessel on April 7 and April 16, 2014. According to their inspection, at first glance, the look of the interior woodwork and finish on board the Aurora is of “very good quality.” However, upon closer inspection, there were many serious issues that give the vessel the feel of a boat that is old and tired. According to the inspectors, the damage from poorly planned hardware and the lack of critical hardware altogether (especially for a seagoing vessel) indicated a rush or casual approach to the task with regards to the building the boat by P.A.E.

Tri Shore Yacht Services inspected and provided a summary of deficiencies found on the motor vessel Aurora. The report highlights items deemed unacceptable for standards common to fully functioning, new delivery of a vessel from the factory.

Barr-Leonard Company found the furnace that was installed on the Aurora to be non-operable due to PAE’s work. Half of the installation had to be removed and the remainder of the furnace had to be re-plumbed and fixed with replacement components.

The two $8,000 dishwashers were damaged during installation beyond repair. Since PAE refused to repair/replace these dishwashers, the appliances had to be replaced at the owner’s expense.

The number of mistakes and shoddy workmanship are evidenced by the following select photos:

Upon closer inspection, there are many serious issues that give it (the Aurora) the feel of a boat that is old and tired.

These images show cracks and open spaces in the crown molding, as well as fingerprints underneath the woods, finish. The wood splits within the same piece of wood caused by “drying or internal stress issues.” Furthermore, there is discolored cloudiness on the wood, which was reported to be “prevalent throughout the vessel…..consistent with a vessel that is already ten + years old. 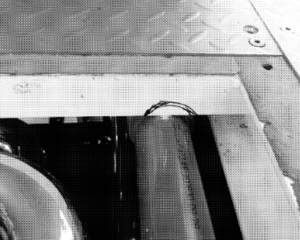 Many other defects and sloppy workmanship were discovered throughout – including a mark-out for a pipe which while marked for the cut, was never actually cut out to accommodate the pipe. (Exhibit 291)

Review several documents outlining the results from inspections and surveys from third-parties.

Many mistruths were stated by PAE, such as the company denying the expert reports and photos.

Questions potential buyers should ask before entering into a contract for the build of a new vessel.