The Nordhavn Fact is that Mr. Conconi’s situation was made worse every turn by PAE. The company did not contribute or compensate for the work Mr. Conconi had to perform on his own vessel. Nordhavn Facts is demonstrating and warning consumers of what could happen if a purchaser buys a vessel from PAE and prepays significantly more than the cost to complete their vessel.

Mr. Conconi has enjoyed many of the vessels he has bought from Nordhavn – in fact, he has purchased 4 of them in the past – but not the process of purchasing his latest Nordhavn through PAE.

When Mr. Conconi advanced sufficient funds to complete the manufacture of his latest vessel with Nordhavn – the Aurora – and the vessel was not completed or finished, Nordhavn Facts found it necessary to highlight this situation.

Mr. Conconi placed his trust in PAE (otherwise he would not have provided PAE with $16,000,000). However, PAE refused to complete the Aurora, leaving Mr. Conconi with major expenses as well as a partially completed boat and much that had to be redesigned and removed (without PAE’s help or contribution).

What is even more troubling, is that PAE had a documented history of begging Mr. Conconi for additional money whenever PAE was unable to meet its financial obligations.  For example, on March 27, 2013, PAE’s project manager, Trever Smith, wrote to Mr. Conconi on PAE’s behalf, explaining that “in order to have the N120 virtually turnkey as it leaves the yard we need to ask for some assistance.”  Mr. Smith went on to explain that PAE immediately needed another $322,000.00, but that this was “finally the last time” PAE would “bug” Conconi with its “cash flow woes.”  [Exhibit 436]

A few short months later, PAE’s President, Dan Streech, followed up on June 21, 2013, with another request for additional money, this time asking Mr. Conconi for a $4 million loan to get Aurora “over the finish line…completed, released from the factory and delivered to Vancouver,” stating “you have been a perfect gentleman, partner and participant in the building of the boat and have done your part and much more…especially in that you have advanced early payments to PAE when we needed them.  We are very very appreciative of all that you have done.”  [Exhibit 267]

But, of course, fast-forwarding to when Mr. Conconi started to insist that PAE honor its obligations to him, Dan Streech’s praise for Mr. Conconi as the “perfect gentlemen” and “partner” suddenly changed, going so far as to refer to Mr. Conconi, the man who saved PAE from financial ruin, as, among other names, a “crazy guy” that is “irrational” (Deposition Transcript of Daniel Streech September 21, 2015).

In fact, you’ll hear Mr. Streech has a history of bad-mouthing most anyone who disagrees with him about Aurora’s condition. For example, Kelly Christian, an expert witness who actually inspected Aurora – was described by Streech as “Creepy.”  (Deposition Transcript of Expert Witness Daniel Streech March 25, 2016).

And Brian Bergmark, an expert witness who testified about PAE’s financial and accounting issues, was referred to by Streech as “an idiot” who Streech wouldn’t hire to “balance [his] checkbook.” (Deposition Transcript of Expert Witness Daniel Streech March 25, 2016).

Mr. Conconi also learned that he and his wife were not the first to enter into a contract with PAE for the N-120 – that another couple were the first – and that Streech described this couple as “high maintenance . . . which was bound to erode the already too low margin” when explaining their defunct deal to the Conconis.  [Exhibit 235]

Dan Streech, Trevor Smith and Jim Leishman also testified that Mike Tellaria – a PAE employee who was aboard Aurora for the trip from Hong Kong to Vancouver – demonstrated the vessel’s systems to Mr. Conconi during that trip in compliance with PAE’s “demonstration of the systems” obligation under the Agreement.

However, when Mr. Tellaria was deposited under oath, he testified as follows:

Q    Do you know if anyone else was demonstrating systems to Mr. Conconi during the voyage?
A    No.

Q    Did you see anybody do any demonstration whatsoever of any system of the N120 during the voyage?
A    No.

In the end, PAE failed to get every dollar it asked for. In fact, during the trial, PAE had to lower its claim because it admittedly miscalculated its final invoice by over $40,000, which was later reduced by another $100,000 by the court of appeals.  Also, PAE claimed at the trial, through Dan Streech, that despite agreeing to deliver Aurora fully fueled, he simply “forgot” to fuel the vessel. Ultimately, PAE lost the appeal, and the judgment was reduced by over $100,000.

In addition, Mr. Conconi was promised that a team of PAE employees would be waiting at the dock to complete Aurora and permit Mr. Conconi to accept delivery. In reality, the entire delivery team left Aurora for the airport on arrival, and another team never came.

The morning of arrival, Aurora developed a serious leak that involved a defective system eroding through the vessel’s sea chests. With the assistance of tape and pumps, the Aurora sailed to Seattle to make emergency repairs. During this time, PAE promised to finish Aurora to its completed state. However, 4 months later, after Mr. Conconi insisted on her return from the Seattle docks, no remaining work had been performed and the Aurora was still in the same condition she was in when taken for emergency repairs.

Dan Streech inspected Aurora on her departure from Delta Marine in Seattle for the first time, four months after Aurora arrived in Canada. It appeared that PAE simply planned a DUMP & RUN, falsely insisting Mr. Conconi had accepted delivery of Aurora and any defects were limited to the manufacturer’s individual warranties.

All inspections were performed in the year that followed delivery and illustrated the same inspected condition as at purported delivery. The reality and performance speaks for itself. Mr. Conconi finished the Aurora without any assistance from PAE.

PAE would like to focus on debt collection and avoid any conversation as to whether they completed the Aurora. Mr. Conconi has no difficulty honoring and paying debts. Instead, this situation is entirely over whether the vessel was completed in accordance with the contract.

PAE went so far as to state Aurora was perfect and all of Mr. Conconi’s claims and inspections were fake. In reality, this case was not about a debt owed to PAE. Instead, it was about whether PAE finished and completed the Aurora in accordance with the Purchase Agreement.

The only record of any observations on the preparation for delivery and transit of Aurora was Jim Leishman’s handwritten note, but no recording was done during transit of the vessel. There was not a single recorded observation or inspection of what was working or not, using a standard set of readings.

Nordhavn Facts has concluded the Aurora was in an incomplete state and was simply abandoned in Vancouver. The fact is, PAE did not investigate further into the situation regarding the Aurora and failed to complete their obligations because they lacked the financial ability to complete the work. Furthermore, various pieces of documentation, such as third-party inspections by Steve D’Antonio and Barr Leonard, illustrate what was incomplete and later done by the purchaser after the vessel was abandoned.

The contract was specific and clear. The remaining 1.8 million was not owned by Mr. Conconi until all systems were demonstrated to a reasonable satisfaction level. As highlighted on the Nordhavn Facts website, various elements of the boat, such as the broken woodwork, for example, were never even attempted to be repaired by PAE.

Nordhavn Facts has come to learn that Mr. Conconi instructed full disclosure – and the documentation prepared by PAE was exactly the opposite.  All in an attempt by PAE to Dump and Run the Aurora, simply maintaining that the transaction of the vessel was completed. This singular, incorrect statement made by PAE caused seizure of the Aurora and significant fines and subsequent court procedures.

Nordhavn Facts has come to learn PAE refused and never corrected the statement by Jim Leishman.

In fact, Mr. Leishman misled CBSA stating he “knew nothing, ”and was only a ‘delivery skipper.’”  Furthermore, Leishman failed to disclose to the CBSA that he, in fact, was the representative of the vendor and Vice President of PAE. Nevertheless, Leishman doubled-down on his false statements, declaring that he was “only a delivery captain and knew nothing of the transaction.” Mr. Leishman proceeded to then direct the CBSA to Mr. Conconi as the owner, which, Mr. Leishman was aware was inaccurate. 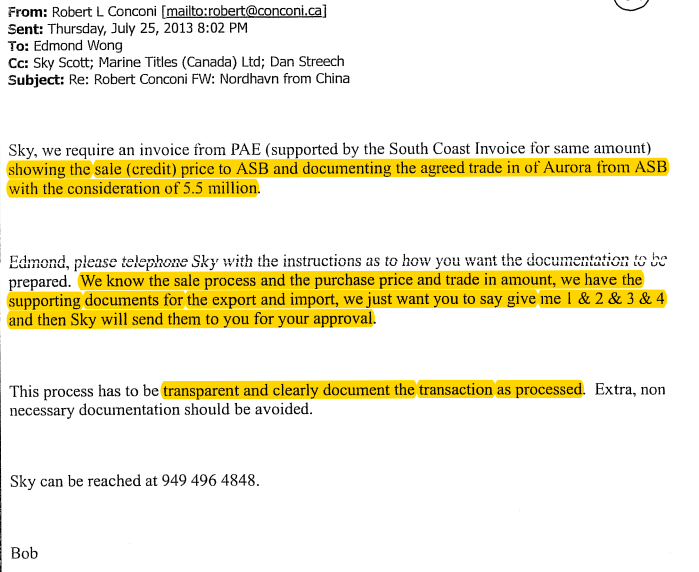 “We require an invoice from PAE (supported by the South Coast Invoice for same amount) showing the sale (credit) price to ASB and documenting the agreed trade in of Aurora from ASB with the consideration of 5.5 million… We know the sale process and the purchase price and trade in amount, we have the supporting documents for the export and import, we just want you to say give me 1 & 2 & 3 & 4… This process has to be transparent and clearly document the transaction as processed.” – Robert Conconi

At the end of the day, no decision was made regarding the incomplete status of Aurora. The fact remains – PAE abandoned the vessel and refused to complete her construction. There are always two sides in a story.  Like anyone else, Mr. Conconi would like his side of the story to be heard and help prevent other customers from having similar experiences.

Review several documents outlining the results from inspections and surveys from third-parties.

Many mistruths were stated by PAE, such as the company denying the expert reports and photos.

Questions potential buyers should ask before entering into a contract for the build of a new vessel.